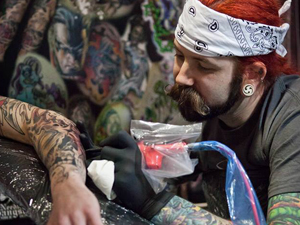 Martin served his Tattoo apprenticeship under Mark “Lofty” Sutcliffe at Inkskin’s Tattoo Studio at 19 years old; where he learned the finer points of the trade and how to make tea for ten!

Martin opened Flesh Scribe studio in early 2005 but an offer from Flaming Gun lead to the decision to join forces in 2007. Whilst working at the 2007 Colchester Tattoo Extravaganza Martin won his first award for tattooing and has gone on to collect others since. Martin has also been a judge for tattoo competitions at prestigious Tattoo Conventions in the UK. In 2017 Martin made the decision to seek new adventures, leave Flaming Gun, move 170 miles and join Epona Tattoo Sanctuary.

Since starting to tattoo Martin has continued to study in all aspects of the craft to constantly improve both his knowledge of tattooing and the service he offers to clients. Martin’s tattoo work has been featured in many UK and international magazines; from the best in the UK to Hotrod periodicals in New Zealand!

Martin remained the only British member of the ShopTalk collective, a group of American and Canadian Tattooists that released “ShopTalk Sketchbook Volume 1” in 2007. Martin remains in contact with many of the original members and counts them among his closest peers. Martin is also a proud member of the Bristol Tattoo Club (established in 1953), the British Tattoo Artist Federation and the Needle Gangstas group (founded in 1993).

Outside of Tattooing Martin has also provided his artistic skills in Graphic Design creating various advertising designs including the T-Shirt designs for a charity organisation (The Condom Rally) for over 20 consecutive years, Flaming Gun T-shirts/ advertising and also ran the Flaming Gun website for 10 years. Martin paints, sculpts, doodles and even manages to find the time to torture musical instruments every so often. Martin builds bespoke guitar pedals once in a while and sells them under the KVNT banner along with other musically themed items.

To get tattoo work from Martin please contact him directly by email: martinxtattoo@hotmail.com or through the studio.

We can only accurately quote with clear reference material and size specifications.